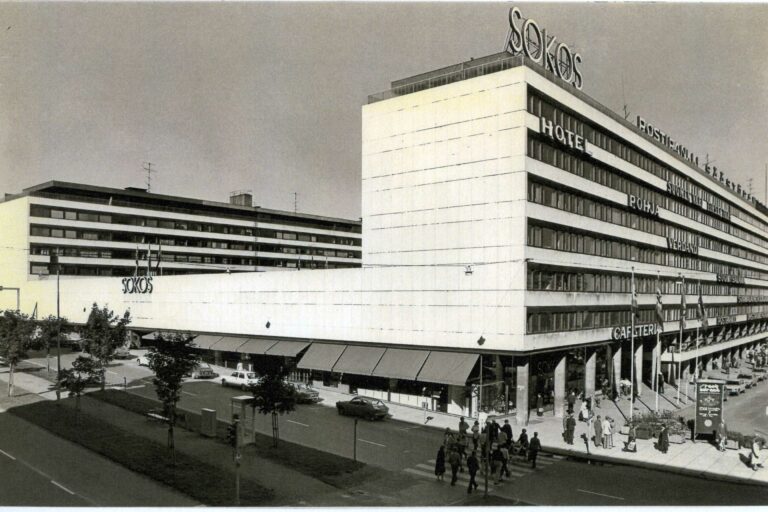 Photographs of Rewell’s history are on display at the corridor between Toriparkki and Original Sokos Hotel Vaakuna, which can be accessed from the upper level of Toriparkki. The permanent exhibition features black and white archive photographs from the Ostrobothnian Museum. Welcome!

The history of shopping center Rewell

The planning and designing of the building that now forms shopping center Rewell begun in the mid 1950’s by Vaasa born architect, Viljo Revell. He was born in 1910, and studied in Helsinki. He has designed various well known landmarks, such as the Lasipalatsi and Makkaratalo in Helsinki, and the Town Hall in Toronto. In Vaasa, Revell has designed the Town Hall and many apartment building at Rantakatu and Hietalahti.

The actual construction of the buildings forming shopping center Rewell started in 1959. Initially, the buildings stood at the sides of the block, leaving the center as an open area shielded from cars by the buildings. The lower floors were utilized by a department store, and the upper floors were used as offices, hotel rooms and flats. Also, an underground carpark was built. The complex was finished by 1964, and at the time there was no comparison to its’ size. The complex was named as Revell’s Center.

In the 1980’s the plans for covering the open center area begun, and in the beginning of the 90’s it was covered by a glass roof. Since then, the building has officially been called Rewell Center. Over the years, the amount of shops and restaurants in the Rewell Center complex has grown significantly, and also, the entrances and interior has gone through a thorough re-furbishment. The shopping center turned 30 in the fall of 2020, when the name was changed to short and concise Rewell.

Nowadays Rewell is the landmark of Vaasa and well known among the people in the area.

You can find out more about which cookies we are using or switch them off in settings.

This website uses cookies so that we can provide you with the best user experience possible. Cookie information is stored in your browser and performs functions such as recognising you when you return to our website and helping our team to understand which sections of the website you find most interesting and useful.

Strictly Necessary Cookie should be enabled at all times so that we can save your preferences for cookie settings.

This website uses Google Analytics to collect anonymous information such as the number of visitors to the site, and the most popular pages.