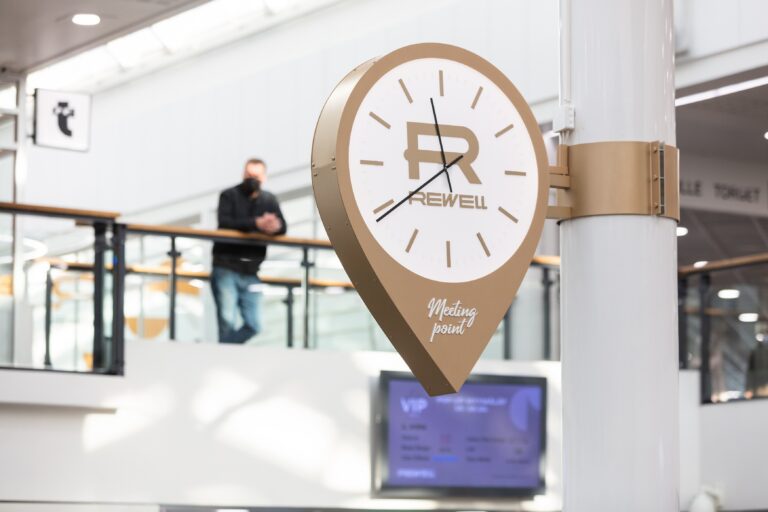 A new meeting place, Meeting Point, has been opened in the square of shopping center Rewell, and at the same time the square has been renamed Viljon aukio – Viljos torg – Viljo’s square.

Meeting Point, which is at the same time a clock, is intended to serve as a meeting place where it is easy to make an appointment with friends. The very central location of Rewell and Viljo´s Square in the center of Vaasa was a very natural place for a new meeting place.

Rewell Square is named after the designer of the shopping center Rewell, architect Viljo Revell. With the new name, we want to give our great square a valuable name and thus honor the legacy of Viljo Revell.

All the streets surrounding the shopping center are marked on the floor taping below the Meeting Point. It’s nice to explore street names while waiting for a friend “under Rewell’s clock”.

You can find out more about which cookies we are using or switch them off in settings.

This website uses cookies so that we can provide you with the best user experience possible. Cookie information is stored in your browser and performs functions such as recognising you when you return to our website and helping our team to understand which sections of the website you find most interesting and useful.

Strictly Necessary Cookie should be enabled at all times so that we can save your preferences for cookie settings.

This website uses Google Analytics to collect anonymous information such as the number of visitors to the site, and the most popular pages.